I’m a trekkie original. The first three series of Star Trek, and the first three (4?) films with the original cast, devised and produced and part-written by Gene Roddenberry, hold a very special place in my heart. It’s the space reserved for unconvincing fx, embarrassingly bad costumes, unconscious sexism, lousy attempts at Scottish and Russian accents, and oh, what was the other thing? That’s right. I remember now, James T Kirk, aka William Shatner. 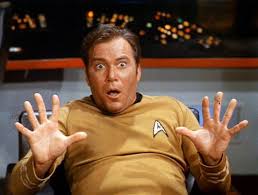 Star Trek, back in the mid 60’s , was new and  fresh and real American rubbish and it was lovely! Lahvely, my sweetlings. Roddenberry sold it to the US networks as ‘Cowboys in space’ and in the mid 60’s cowboys is what we wanted… let me reel off a few without even googling; Cheyenne, Laramie, Wagon Train, The Lone Ranger, Bonanza, that one with Ty Hardin, Bronco, The Virginian…. But Star Trek was much more than those simple one-strand dramas, featuring only bad vs good in a dusty landscape, with the good always winning. I’m not saying it was clever. How could it be? It was devised by a man who knew nothing about space, nothing about the future, zilch about technology and precious little about casting. But he had commitment and vision and energy and hutzpah.

I miss it. I have a couple of pals who have the razz dazzle of hutzpah, the oomph of self-belief, and they are FUN. I bet Gene was fun. Probably exhausting, and you wouldn’t want to be married to the guy, but, you know…. fun. He’d fire you up, and get you dreaming and reaching and doing. Lovely.

Gene Roddenberry thought that the future was exciting, thought we would be able to beam up and beam down, our molecules vanishing from the earth’s atmosphere to reassemble on some other planet or spaceship. He thought that the world powers would unite and become benign, peace loving whilst still being, somehow, adventurous and bold and daring. Heroes miraculously being both macho-man and new-man. Doh! He imagined a world where men and women would be dedicated to service and self-sacrifice as they wore ill-fitting synthetic uniforms and ate lurid food, sitting at madly blinking consoles, twiddling indiscriminately with knobs and levers. He thought that man was on a trajectory to nobility.

So, he didn’t know a lot about history, eh?

But Gene was both a realist and a visionary. He wanted to earn money, to make telly and not to take himself too seriously. He wanted to create a drama that had heart and ambition,  that would explore the ideas of egalitarianism, racial integration both socially and in the work place (Uhura gave the studio bosses nightmares), universal pacifism, and a lot of boy-stuff nonsense like doors that swished and ‘phasers to stun’. In Star Trek there was the first inter-racial kiss on screen. The story of that kiss is just gleeful; the studio bosses saw it in the script and they protested. Gene said nothing. They didn’t trust his silence to mean agreement, so they sent two lackeys onto the set on the day the scene was scheduled. Sure enough, the actors rehearsed the scene with the kiss. The lackeys forbade it. After much phoning between the studio floor and the execs offices, Gene managed to delay the scene until the end of the day. Then he shot two versions, saying that the bosses could decide which was best. In one Uhura and Kirk kissed, and in one they didn’t. Roddenberry made sure that all the takes of the no-kiss version were out of focus or had some other problem. The takes with the kiss, well, they were perfect! And so, with confidence and hutzpah, he quietly established that people are people, lips are lips, and it’s no big deal.

Tonight, there’s no snooker on the telly, and I’ve finished my rewrites on the play, so I settled down to watch Star Trek – The Wrath Of Khan again. It must be about 5 years since I last saw it. I just laughed and laughed. I love it still. I do.

Listen to one of the priceless lines, as  the SS Enterprise prepares to go into its final battle with the wicked Khan (not so much a man as a genetic experiment gone wrong). Kirk asks Scotty for something – it doesn’t matter what, phaser power or proton torpedoes or something equally bizarre and this American actor, in his terrible faux Scottish accent replies “I’ll do ma best, Captain, but the energiser’s bypassed like a Christmas tree.”

I know it’s not good to grumble, complaint does not glorify God, but come onnnnn….

Where’s the justice? How come I never once had script editor who would let me get away with lines like that?

These were the  opening lines of every Star Trek episode

“Space: The final frontier,
These are the voyages of the Starship Enterprise,
Its 5 year mission:
To explore strange new worlds,
To seek out new life and new civilizations,
To boldly go where no man has gone before.”

And he certainly took us to where no man had been before – to orange planets with purple creatures, emotionless beings, passionate madmen, Greek gods, transmorphics,  he took us into nebulas, through black holes, to the edge of the universe, he introduced us to small furry animals who regenerated every few seconds, to…….

Ah, Gene. I love you, mate. You were bonkers and there’s not enough bonkers in the world.

I've had a full and exciting life, and I still have excitement and adventure, and plan to go on doing so until my last breath. Christ following is full-on,amazing, challenging. I would love to share the sense of endless (eternal!) possibilities Christ brings. This is just one woman's experience as I follow the way of Christ. I'm a dramatist, having written for TV, radio and theatre for over 30 years. Past work includes devising and writing 'Soldier,Soldier', Peak Practice, Bramwell... and there are about I think 20 Tv projects including films, series, and mini series, as well as radio dramas and theatre plays. I'm still writing, still dreaming, still blogging, still me. View all posts by lucygannon

2 thoughts on “To boldly go”