Definition: Beachcombing is an activity that consists of an individual “combing” (or searching) the beach, looking for things of value or interest.

Three days ago, I was sitting on my log on the beach, listening to the Gospel of John, all alone and lost in thought, when I heard my name called. Someone had come down to join me, and it was just lovely! It was the best possible gift anyone could give, a time of shared prayer on the beach I love, under a huge sky, as the dogs skittered and snuffled around us. What a gift!

I beachcomb every morning and I always find something of value.

All these photos were taken today. When I walked onto the beach it was a wintery scene, with a blustery cold wind and grey skies, but slowly the sun broke through, the sky lightened, and clouds danced… so come with me, see what treasures I found today:

He spreads out the northern skies over empty space;
he suspends the earth over nothing.
He wraps up the waters in his clouds,
yet the clouds do not burst under their weight.
He covers the face of the full moon,
spreading his clouds over it.
He marks out the horizon on the face of the waters
for a boundary between light and darkness. 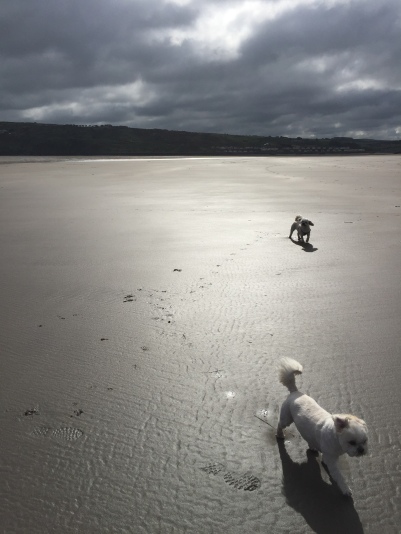 And these are but the outer fringe of his works;
how faint the whisper we hear of him!
Who then can understand the thunder of his power?’

And some from John:

And as I paddled I found Genesis:

In the beginning God created the heavens and the earth.  The earth was without form, and void; and darkness was on the face of the deep. And the Spirit of God was hovering over the face of the waters. Then God said, “Let there be light”; and there was light. And God saw the light, that it was good; and God divided the light from the darkness. God called the light Day, and the darkness He called Night. So the evening and the morning were the first day.

Then God said, “Let the waters under the heavens be gathered together into one place, and let the dry land appear”; and it was so. And God called the dry land Earth, and the gathering together of the waters He called Seas. And God saw that it was good.

As I walked back, through the dunes, I met Ecclesiastes;

He has made everything beautiful in its time. He has also set eternity in the human heart; yet no one can fathom what God has done from beginning to end.

Every day, every single day, there is treasure to be found, jewels glinting in the sand, diamonds sparkling in the waves, riches in the grassland…… and God. Oh, yes, and God.  God is always there, wherever we search for Him. Mountain top, valley, ghetto, pit or palace, He’s there.

Habakkuk got it right when he said:

His glory covered the heavens
and his praise filled the earth.
His splendour was like the sunrise;

I've had a full and exciting life, and I still have excitement and adventure, and plan to go on doing so until my last breath. Christ following is full-on,amazing, challenging. I would love to share the sense of endless (eternal!) possibilities Christ brings. This is just one woman's experience as I follow the way of Christ. I'm a dramatist, having written for TV, radio and theatre for over 30 years. Past work includes devising and writing 'Soldier,Soldier', Peak Practice, Bramwell... and there are about I think 20 Tv projects including films, series, and mini series, as well as radio dramas and theatre plays. I'm still writing, still dreaming, still blogging, still me. View all posts by lucygannon

3 thoughts on “Beachcombing for beginners”