I’ve been thinking today about the best laid plans of mice and men, examining some of the ‘what ifs?’ in life. It’s something I have never really allowed myself to do – it’s mostly a waste of time to regret what hasn’t happened. But today I’m in a summarising, thoughtful, weighing-up mood.  So here’s a few what ifs;

What if George had not died when he did, when I was 42 and just two years into my writing career? I wouldn’t be here in Wales, that’s for absolute sure. I wouldn’t be attending any church, because my lovely and prayerful husband didn’t like churches. I would have been less alone making all the decisions a free lance writer has to make, and I would have made less, or different, mistakes. My life would have been richer, deeper, different.

If George had not died when our daughter was 14 years old, her life would have been very different too.  They were close, father and daughter, they did so much together from archery to drawing to ganging-up on me. When he died she lost her rock and her guide.

But what of him? What if he hadn’t died, was still with us? He would be well into old age now, no longer able to row or scull, or aim for the gold on the archery field, or run his beloved 18kms a day (his knees were already beginning to fail). He would be finding that his joints ached in the mornings, his memory was slipping, his friends were dying, his wife was old (I am!)

Let me tell you about George when I first met him. He was a Scot, broad shouldered, stocky, blond haired, blue eyed. He walked with a sort of bounce, an irrepressible energy that he took into every part of his life, whether it was work or home or sport. He was an engineer, deep in the sciences, in facts and figures, the laws of engineering, equations of energy, power, mass and effect. He didn’t have much time for emotion, too much a stoic Glaswegian, and we rarely did anything romantic. But we got on very well, we liked each other, made each other laugh, talked non-stop. We couldn’t go into a pub without him remarking on the structure of the vaulted ceiling and explaining why there was a cross bar, and musing on the downward forces that were exerted, or … you know… bloke stuff. We were opposites but  we just ‘got’ each other. I thought he was bloody marvellous and he was.

George was a sportsman, a rower, an archer, a runner, a table tennis fiend. He drank quite a bit, smoked a hell of a lot, and so did I. A match made in heaven. When we met I had fled from a violent marriage and he was going through an acrimonious divorce and we took all that baggage into our relationship. We were both in a mess for the first 5 years of our marriage, and we made mistake after mistake, ending up alienated in South Africa,  distraught to realise that we were heading towards another divorce, guilty about all that would mean for our 4 year old daughter.

And then there was a knock on the door of our bungalow and a new neighbour, a Pastor’s wife,  brought us a plate of brownies. For something to do on a Sunday (George would be sleeping off Saturday night’s whisky) I started to go to her husband’s church, and yes, I did so with an air of ‘You God-people are all wrong but I’ll humour you’. I didn’t need Christianity. I’d grown up Catholic, nearly become a nun at one point, I knew everything there was to know about everything and life was bad enough as it was without adding a whole mountain of guilt. But it would pass the time on a Sunday morning.

God has been very very good to me. He has sent me to two churches where the teaching is not just true but also arresting, intriguing, diligent, revealing. I think the word I’m searching for is ‘good’.

A few months later, shedding the weight of a troubled childhood and adolescence, I became a Christian. A few months after that, George came to Christian faith, all alone, reading a book and sipping his beloved whisky (Laphroaig – ghastly stuff! If you’ve been imbibing Laphroaig do NOT try to kiss me afterwards. Refusal often offends) and he – overnight – became a new man. I can’t describe it any other way,  overnight I was given a gentle, warm, strong, supportive husband. The battles were done. A few skirmishes remained, but we were on the same side, growing together, maturing, and learning to be tender with each other, to let go and forgive and enjoy.  The next 8 years were like the first years of a marriage, and always a kind man,  now he became a thoughtful, prayerful man, who could still reduce me to tears of laughter (as his daughter and grand daughters do now). His humour and his lovely personality remained but over it all there was now a deep peace and trust and warmth. He was a good bloke. I miss him, even after 27 years.

Life with him by my side through all the years as a writer and mum would have been very different. I can’t turn to God and tell him that I wish it had been different because, you know, in my heart, I don’t. I think that George had the best years, and he left this world before his hard years arrived.

I am glad for him. God gave him a great gift when he died as he did, suddenly, dead before he hit the ground, gone. Brilliant way to exit this life, but he missed our daughter growing up, and for that I am so sad, to see her grieving for her daddy was a terrible thing. And that grief remains and has coloured our lives.

Today it’s our daughter’s birthday.  He thought the world of her. He called her a lioness. When she excelled at rounders he dubbed her ‘slogger Marshall’. He was into women’s lib long before I gave it a thought.

This blog is my thanks to God for the husband I had, and the daughter I have. This blog is giving God all the praise and all the joy of my life. And it’s thanking Him even for the hard cold time of George’s death, because that was His gift to George, and I am so grateful that my lovely man didn’t have to face old age. So I suppose I’m also thanking God that I’m alone now.

There’s a turn up for the book!

Happy birthday to our daughter. A father’s love is outside of time and place, so I’m sure that the particles and atoms and the heartbeat that made up George’s love are still all here, in the air we breathe, and that they are reaching her today.

She’s not here today, and he is long gone, but love unites us. Our love to our daughter, his love and mine. 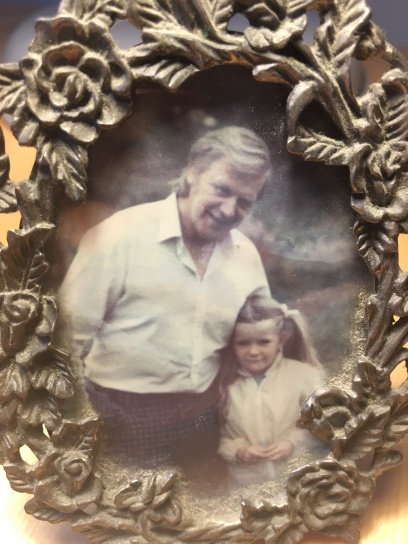 I've had a full and exciting life, and I still have excitement and adventure, and plan to go on doing so until my last breath. Christ following is full-on,amazing, challenging. I would love to share the sense of endless (eternal!) possibilities Christ brings. This is just one woman's experience as I follow the way of Christ. I'm a dramatist, having written for TV, radio and theatre for over 30 years. This year I am launching a script editing service, and more about this will follow. Past work includes devising and writing 'Soldier,Soldier', Peak Practice, Bramwell... and there are about I think 20 TV projects including films, series, and mini series, as well as radio dramas and theatre plays. I'm still writing, still dreaming, still blogging, still me. View all posts by lucygannon